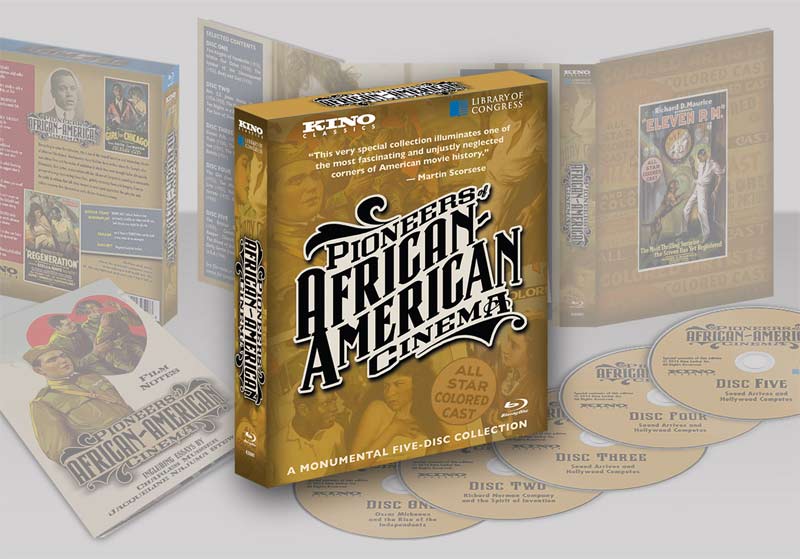 Check out “Pioneers of African-American Cinema” on Netflix

Among the films selected by series curators Charles Musser and Jacqueline Stewart are:

The Blood of Jesus (1941) Spencer Williams’s directorial debut — a surreal religious parable, selected to the National Film Registry in 1991. The film was restored by the Tyler, Texas Black Film Collection of Southern Methodist University, with funding from the National Film Preservation Foundation

The Girl from Chicago (1932) Oscar Micheaux’s crime/romance/musical, in which a Mississippi woman becomes involved with an undercover agent and moves with him to Harlem (Library of Congress)

The Symbol of the Unconquered (1920) Perhaps the boldest film of the early African-American cinema was this film by Oscar Micheaux, that dared to confront the Ku Klux Klan. Previously unavailable on DVD, this edition will be mastered in HD from a 35mm film element preserved by the Museum of Modern Art and the Cinémathèque Royale de Belgique. It features a musical score by legendary jazz drummer Max Roach, courtesy of Turner Classic Movies.

Birthright (1939) Only three reels exist of one of Oscar Micheaux’s last films (a remake of his own 1924 silent film). Preserved by the Library of Congress.

By Right of Birth (1921) This fragment is the only film that survives from the Lincoln Motion Picture Company, one of the first and foremost producers of African-American films, co-founded by Hollywood actor Noble Johnson.
(Announced titles are pending restoration and subject to change.)

Among the most fascinating chapters of film history is that of the so-called “race films” that flourished in the 1920s – ‘40s. Unlike the “black cast” films produced within the Hollywood studio (such as Stormy Weather or Green Pastures), these films not only starred African Americans but were funded, written, produced, directed, distributed, and often exhibited by people of color. Entrepreneurial filmmakers such as Oscar Micheaux, Spencer Williams, and Richard D. Maurice not only built an industry apart from the Hollywood establishment, they also cultivated visual and narrative styles that were uniquely their own. Defying convention and operating outside the studio system, these filmmakers were the forefathers (and -mothers) of the French New Wave, the L.A. Rebellion, and the entirety of American indie cinema. Anything but imitative, these Pioneers of African-American Cinema were purely innovative.

Renowned for its deluxe editions of masterpieces of world cinema, Kino Lorber will now pay tribute to the Pioneers of African-American Cinema with an ambitious four-disc collection. If the campaign achieves its primary goal, the series will include eight feature films and a variety of short films and fragments, a color booklet of photos and essays, and will be offered on Bluray and DVD. All films will be newly mastered in high definition from film elements preserved by the country’s leading film archives, including The Library of Congress, the National Archives, and the UCLA Film and Television Archive. Silent films will be accompanied by a variety of original music scores. Some soundtracks will have a more contemporary sound, encouraging the viewer to watch these films with a fresh perspective. For the sake of historical accuracy, each silent film will also include a traditional score intended to replicate the 1920s moviegoing experience.

Curated by film historians Charles Musser and Jacqueline Najuma Stewart, and presented by executive producer DJ Spooky, Pioneers of African-American Cinema will showcase not only the works of MIcheaux and Williams, but lesser-known filmmakers such as James and Eloyce Gist, as well as rarely-seen footage shot by writer Zora Neale Hurston. It will also include selections of “race films” made by white directors, such as Richard E. Norman and Frank Peregini. Without a doubt, it will be the most comprehensive collection of early African-American cinema ever assembled. The handsomely packaged collection will be released in February, 2016, to coincide with the celebration of Black History Month.

But such an ambitious undertaking cannot be achieved without your help. Your donation will support the composing and recording of music scores; the production of videotaped interviews with leading film and culture historians; and the publication of a booklet of artwork and newly-commissioned essays on the films.

The campaign has a variety of participation levels, allowing you to take an active role in bringing this long-overdue project to life. Even the smallest donation sends a message of encouragement that lets us know you value the cultural significance of these often neglected films, and will allow the voices of these overlooked artists to be heard.

As the campaign progresses, we will reveal more details of the collection, release more behind-the-scenes videos, introduce other collaborators in the project, and, if we reach our initial target, announce “stretch goals” that will enable us to expand the project with exciting new features. So make a donation now to become a part of film history!

ABOUT THE FILMS (partial listing)

COMMANDMENT KEEPER CHURCH: Later known for her novel Their Eyes Were Watching God, Zora Neale Hurston used a 16mm movie camera to document the social conventions and working conditions of African Americans in the deep South. Commandment Keeper Church, Beaufort, South Carolina, May 1940 is a 42-minute film that observes worship services among the Gullah people of Beaufort, South Carolina, in May, 1940. Selected for the National Film Registry in 2005, the footage will be synchronized with previously unreleased field recordings made by Hurston during her travels.

ELEVEN P.M.: A truly bizarre mixture of sentimentality, spirituality and the supernatural, Eleven P.M. follows an impoverished violinist who tries to protect a young girl from straying into a life of sin — and features one of the most mind-boggling endings ever (the poster above provides a hint). Produced by the Maurice Film Company of Detroit, Michigan. Previously unavailable on video.

THE FLYING ACE: Conceived as an adventure serial for the “colored cast” market, The Flying Ace is an aviation-themed romance produced by the Florida-based Norman Film Manufacturing Company. This edition will be mastered in HD from 35mm elements preserved by the Library of Congress. Previously unavailable on video.

VERDICT NOT GUILTY: This stylized, allegorical film was intended to be shown in churches prior to a sermon, and has the distinction of being the first film (co)directed by an African-American woman, being made by the husband-and-wife team of James and Eloyce Gist. Previously unavailable on video.

THE SCAR OF SHAME: Produced by the Colored Players Film Corporation and released in 1929, The Scar of Shame dramatizes issues of class within African-American society. This new edition will include the newly rediscovered wedding sequence, missing from the version previously released on DVD.

WITHIN OUR GATES: Considered the most influential of the early African-American filmmakers, Oscar Micheaux fearlessly confronted social issues of the day, unafraid of offending the sensibilities of the audience — both white and black. Within Our Gates (1919) is Micheaux’s masterpiece, a response to the Chicago Race Riot of 1919 and a purgative to the lingering aftertaste of D.W. Griffith’s The Birth of a Nation. We will showcase the Library of Congress’s acclaimed 1993 restoration, newly remastered in HD.

Additional titles will be announced over the course of the Kickstarter campaign.

THE NEED FOR FUNDING

In the past, Kino Lorber has not used crowd funding to produce its classic releases. However, Pioneers of African-American Cinema is the most ambitious archival release we’ve ever undertaken, and we can only pursue the project, on the scale of production it deserves, if we raise funds from the audience. Some examples of where your money will go:

Archival Access – In exchange for access to the original film elements, Kino Lorber will make donations to the preservation funds of the archives at which the films are stored. These donations range from $1,000 to $4,000 per film. The more money we raise, the more films we’ll include in the collection. Since we plan to release at least eight features and a selection of shorts, the archival donations alone will total an estimated $20,000.
Mastering Costs – Each film will be newly transferred in HD or 2K from the original 35mm and 16mm elements. Once the films are all digitized, they each undergo a thorough mastering process, including scene-by-scene color correction (to balance the brightness and contrast), digital dirt/debris removal, image stabilization, and, in the case of silent films, conversion to a historically accurate projection speed.
Musical Scores – One of the most costly stages of production is the creation of new musical scores for the silent films. Kino Lorber will commission a variety of scores to complement the films. Contemporary cores will reawaken these archival rarities and challenge our preconceptions of these motion pictures as antiquities. We will also provide more traditional scores, crafted to approximate the style of music that would have been heard at a screening in the 1920s.
Booklet – The specially packaged four-disc set will include a 40-page booklet with introductions by the series curators, background information on the films and filmmakers, photos, and notes from the producers.

Paul Miller, aka DJ Spooky (executive producer) has had an abiding interest in historical film. His remix of D.W. Griffith’s infamous The Birth of a Nation paved the way for how we think about applying DJ technique to cinema. As Executive Producer, Miller brings a sensibility that looks at film history and contemporary production as a seamless transition between the history of film and our modern digital media era.

Charles Musser (curator) is Professor of Film & Media Studies at Yale University. He has written extensively on Paul Robeson and co-curated Robeson film retrospectives at the UCLA Film and Television Archive and the Museum of Modern Art. He also co-edited Oscar Micheaux and His Circle: African-American Filmmaking and Race Cinema of the Silent Era (2001). His many books on American silent film include the award-winning The Emergence of Cinema: The American Screen to 1907 (1990) and Edison Motion Pictures, 1890-1900 (1997). Charlie’s documentary Errol Morris: A Lightning Sketch (2014) premiered at the Big Sky Documentary FIlm Festival.

Jacqueline Najuma Stewart (curator) is Professor of Cinema and Media Studies at the University of Chicago. She is the author of Migrating to the Movies: Cinema and Black Urban Modernity (2005) and co-curator and co-editor of L.A. Rebellion: Creating a New Black Cinema (2015) with Allyson Field and Jan-Christopher. Stewart is completing a study of the life and work of African American actor/writer/director Spencer Williams.

Bret Wood (producer) has designed and produced numerous award-winning editions of silent and classic for Kino Lorber, including Edison: The Invention of the Movies, The Erich von Stroheim Collection, Gaumont Treasures, Griffith Masterworks, Stanley Kubrick’s Fear and Desire, Orson Welles’s The Stranger, and collections devoted to Ernst Lubitsch, F.W. Murnau, and Mario Bava, among others. His films as director include The Unwanted and the documentary Hell’s Highway: The True Story of Highway Safety Films. 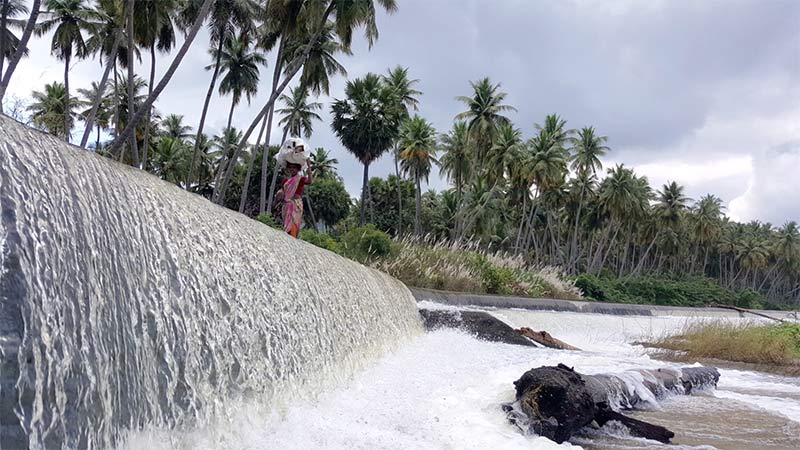